I am a southerner and southerners do love all things monogrammed. My favorite quote is from one of my girls’ teachers who said, “I would monogram my toothbrush if I could!” It’s true, we do go a little crazy with our monograms, but a well placed, well done and perfectly sized monogram can also be a perfect thoughtful Father’s Day gift. Here are three ideas:

Monogram the cuff of his dress shirt – When I was growing up, the only person I knew with a monogrammed dress shirt cuff was a gentleman at my church who was the vice president of a bank. I remember seeing that detail and thinking how sophisticated and smart it looked. Monogramming a cuff can be tricky so let’s break it down. First, pick a nice clean or new dress shirt. Most of the time, a man’s shirt is only monogrammed on the left side, on the top. The idea is the monogram will show when they look at their watch. You can certainly monogram both sides, but if you do, I would suggest making the letters smaller. Sulky 60 wt. PolyLite is always a good choice for small lettering.  It keeps the letters more readable, the e’s don’t close up, that kind of thing.  Use it in both top and bobbin.  For a cuff, Sulky Sticky+™ is a perfect stabilizer. Hoop the Sticky+ (with the gridded release sheet still on and facing up); score the inside area of the release sheet and peel it away. Stick the opened cuff onto the Sticky+ and baste it in the hoop if you can.  If your machine doesn’t have the baste feature, use KK 2000™ Temporary Spray Adhesive with the Sticky+ (makes it even stickier).  Without the baste, run the machine slowly and monitor the stitching closely. You do not need a topper on a clean, crisp fabric.

The Monogrammed Handkerchief – It may sound old fashioned, but I love a man who carries a handkerchief (truly, my wonderful hubby carries one just for me).  There is just nothing more comforting than a daddy handing his little girl a soft monogrammed handkerchief to dry the tears that come from a happy or sad occasion. Maybe it’s because I am a southerner or because my daddy always had two of them in his pocket in case my mom and I both needed one at the same time. Give your daddy, the daddy of your children or the daddy of your grandchildren a set of monogrammed handkerchiefs with a thoughtful note explaining the comfort and love that they represent, and I bet he will never leave home without one again.

Because handkerchiefs are usually very thin, they can be tricky to monogram. I hooped Sulky Sticky Fabri-Solvy™ and carefully stuck down the handkerchief. I also used Sulky KK 2000 Temporary Spray Adhesive to adhere a layer of Sulky Heat-Away on top. If you are putting the monogram in the corner, using the Sulky Sticky Fabri-Solvy will help ensure the handkerchief stays in place. You may also want to baste this down if you have that option. I used a Schmetz Microtex 12/80 needle and Sulky 40 wt. Rayon in Dark Nickel Gray. If the handkerchief isn’t as crisp as you would like after you embroider on it, then spray some starch and iron.

The Monogrammed Notepad Cover – The key to this is the fabric and the font. I chose a dark brown faux micro suede with a thread that is just slightly lighter (Sulky 40 wt. Rayon #1266 Toast). I also chose a clean masculine font for the letter. I didn’t want to hoop the fabric for fear of it leaving a ring, so I stabilized this with Sulky Sticky+. Do the monogram first, then make the Notepad cover. I have a separate tutorial on how to make a Monogrammed Notepad Cover here.

I hope you will monogram something for a special daddy in your life this Father’s Day! 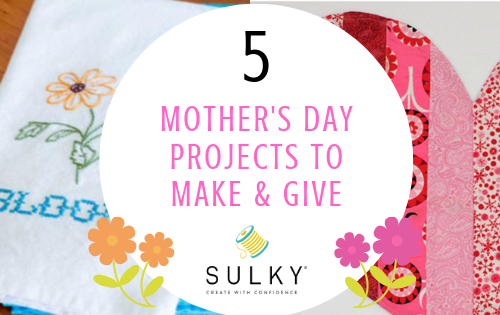 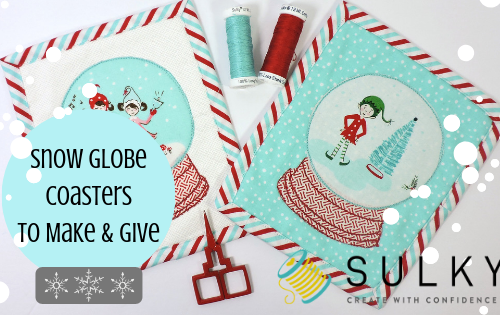 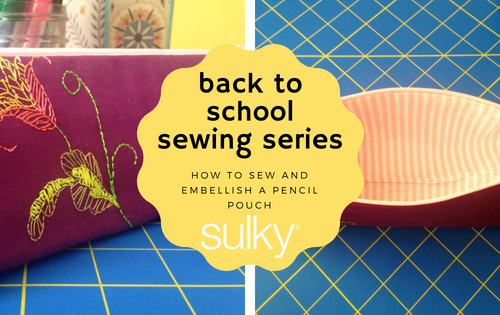 Back to School Sewing Series – How to Make a Pencil Pouch