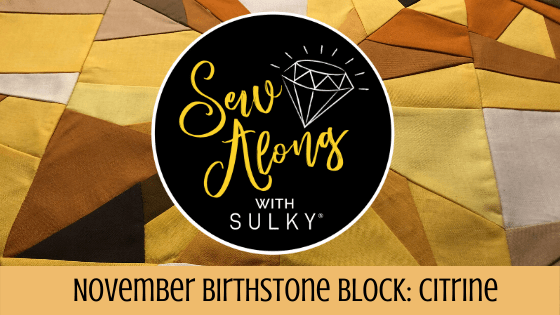 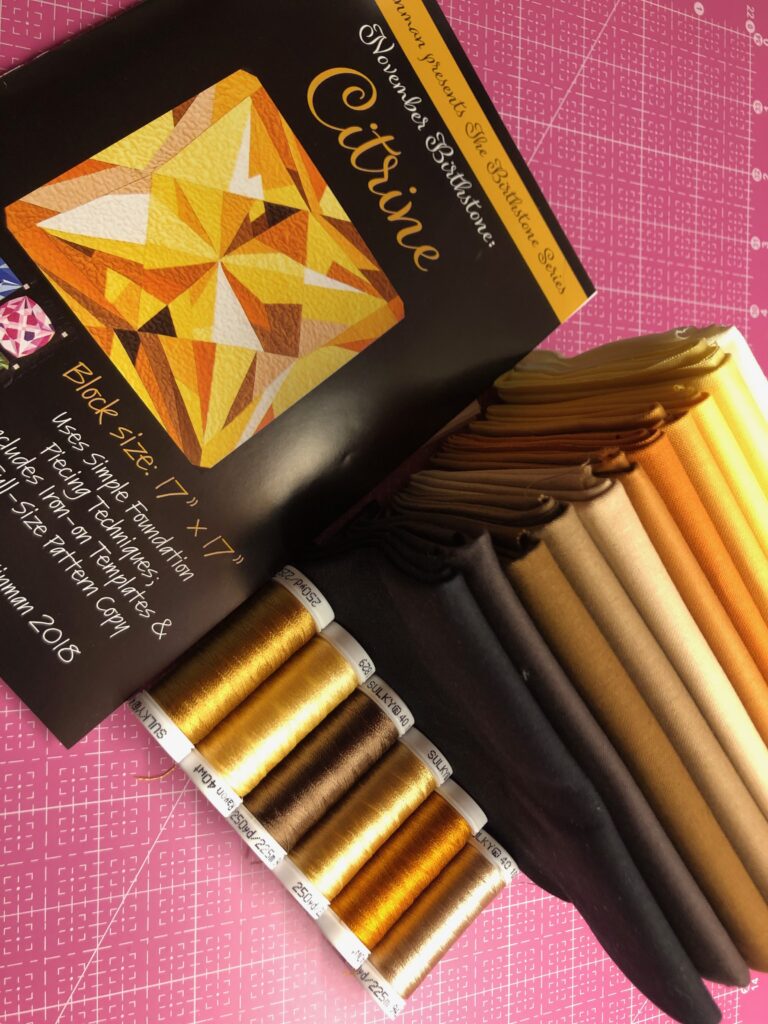 Grab your November Birthstone Block kit and get started on making this beautiful gemstone to either quilt on it’s own or add to a larger Birthstone quilt!

We’re on our way to make a birthstone block for each month, and we have five blocks left! We started this last May and have been doing one birthstone a month ever since. I feel so accomplished! Don’t you?

If you’re just now starting, don’t fret. Peruse the past sew-alongs on the blog and you’ll get all the tips you need to create these with confidence!

With this November Birthstone block, I have to admit that I made the BIGGEST mistake one can make with these patterns. (And I still recovered, but I’ll get to that in a minute). I cut the KEY rather than the freezer paper template! Gasp!

I started as confident as ever. Because, as I mentioned, I’ve done a lot of these and I know the drill by now. In my head I’m saying “cut the pieces, fuse to fabric, cut the fabric, piece the fabric.” My auto pilot kicked in. I even confidently continued taking photos along the way to share with all of you. 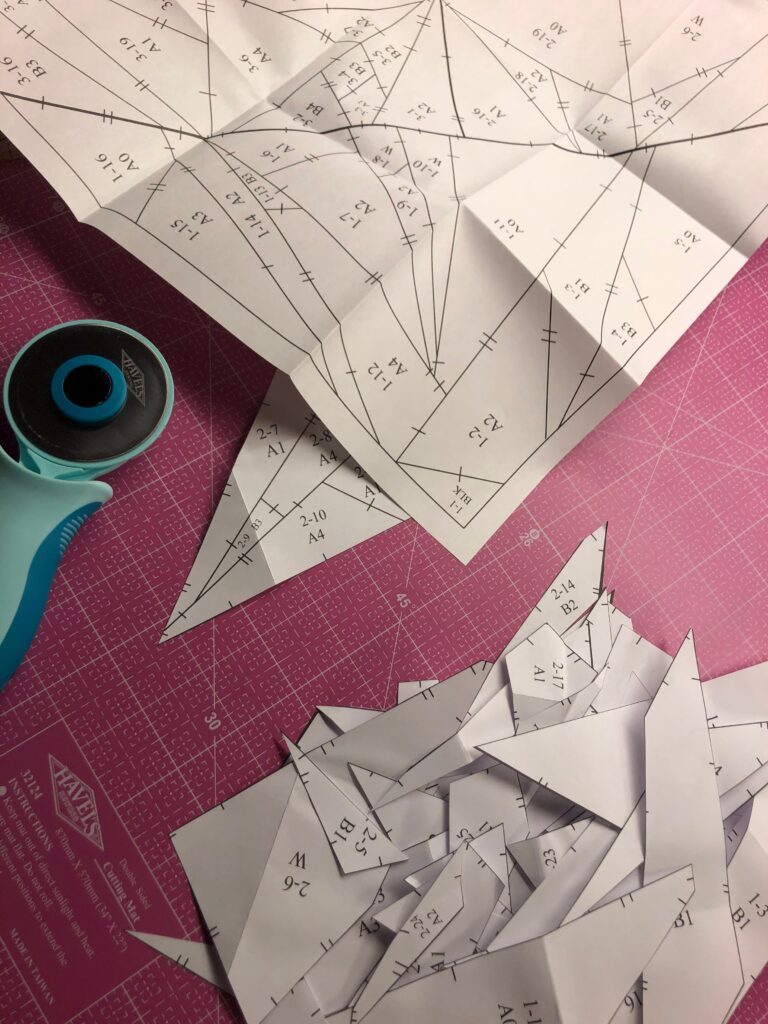 Right about when I took this photo, I realized…WAIT, the paper doesn’t feel shiny on one side! Oh no! I’ve cut the KEY! I had already cut more than half of the facets and I was devastated.

I had three options:

I opted for a combination of solutions. I used the freezer paper pattern to cut out a new key. It was a painstaking process, but my trusty Wafer 2 light box was my savior. 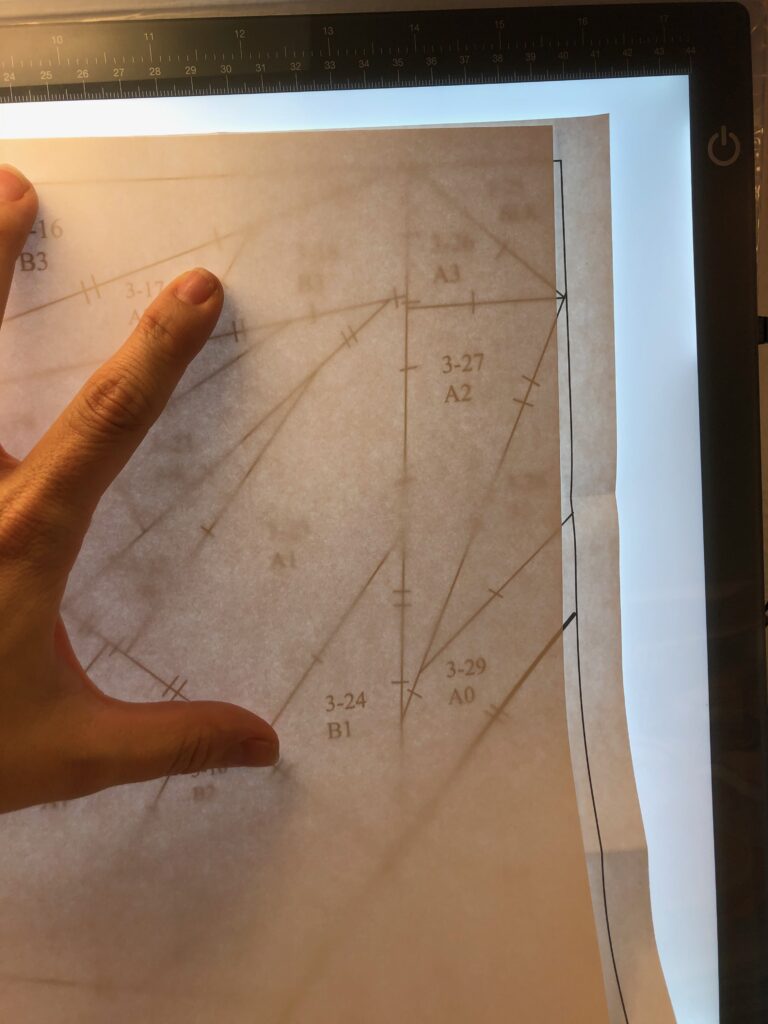 I also wanted to utilize the facets I had already cut, despite them not being fusible at this point. It takes quite a while to cut out the pattern and I had already lost a good amount of time by having to trace the intricate pattern.

I did a test using Sulky KK 2000™ Temporary Spray Adhesive.  I sprayed the fabric surface with KK 2000 and stuck the paper templates to the fabric. Then I let it sit while I cut out the rest of the facets to see how long the spray would hold. 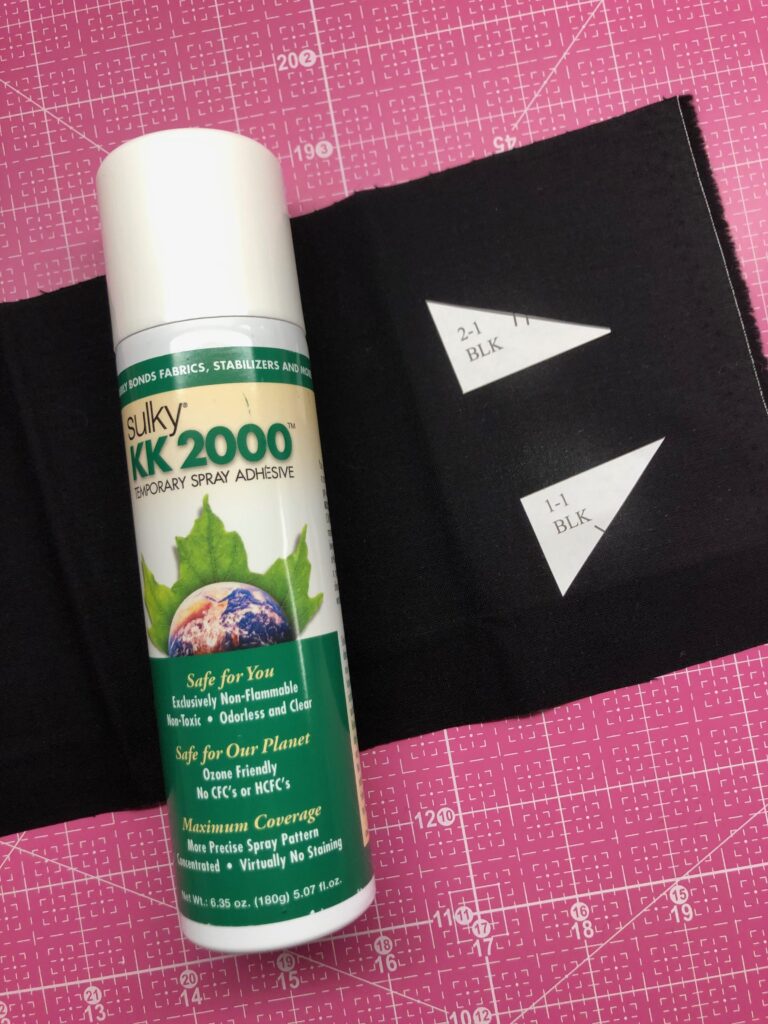 It stayed tacky for about 24 hours! Once I discovered that this method would work for the paper I accidentally cut, I had to work fast.

Typically when I make a Birthstone Block, I do the work in stages. One day is spent cutting the facets from the freezer paper (not Key). The next day is spent prepping the fabric and cutting the facets from the fabric. Then I spend the next day (or several days) piecing the block in spurts. But now that the KK 2000 needed to hold, I had a much tighter deadline! 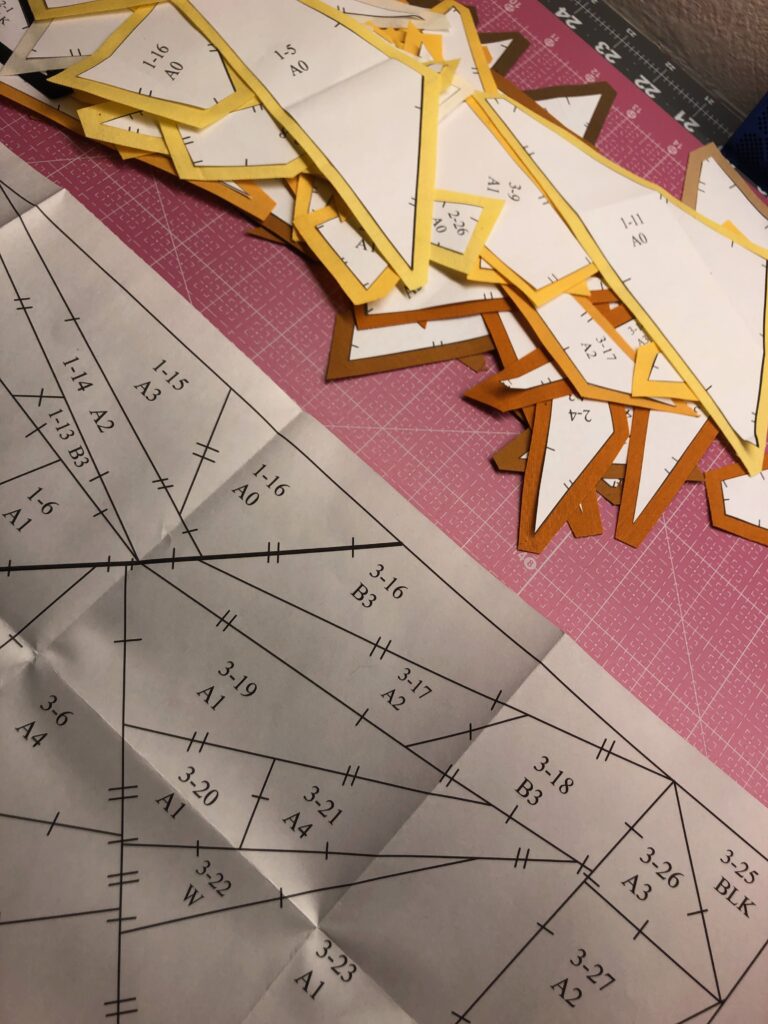 I ended up creating this entire block in about 6 hours, including cutting, spraying, fusing and problem solving!

This November Birthstone Block has a lot of what MJ Kinman calls “needle nose points.” They require a bit more special handling than the typical facets, and it’s a good idea to begin stitching at the tip of the skinniest point for best results. 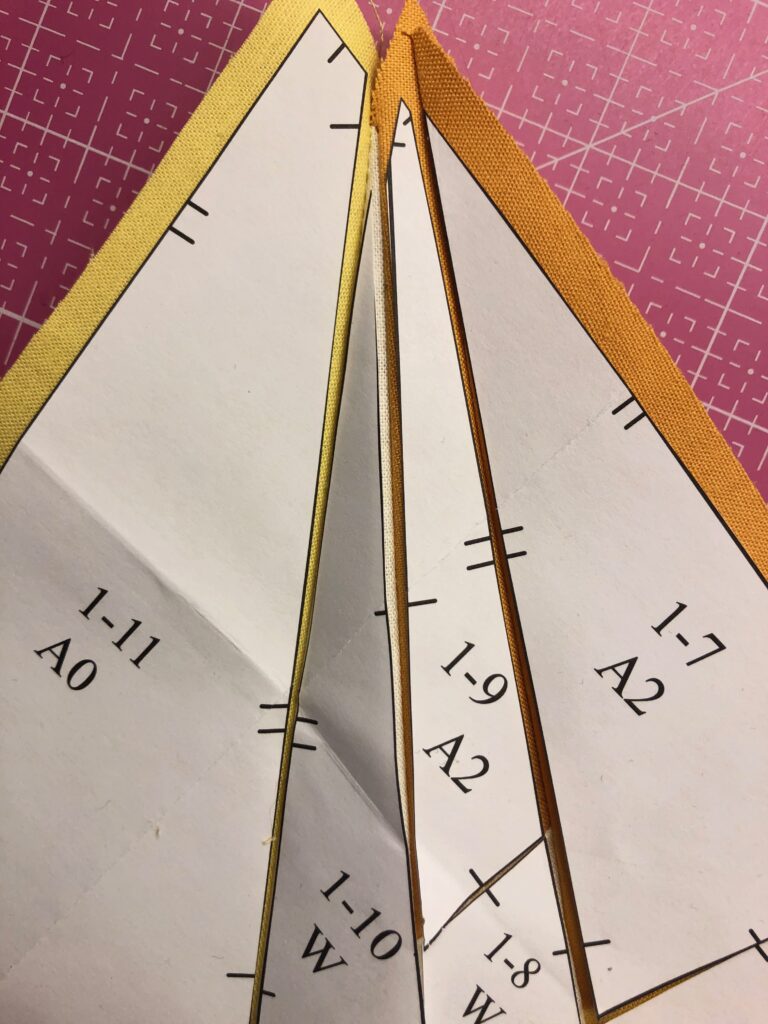 You also need to trim the sections before piecing the block quadrants to make sure you’re working with straight lines. 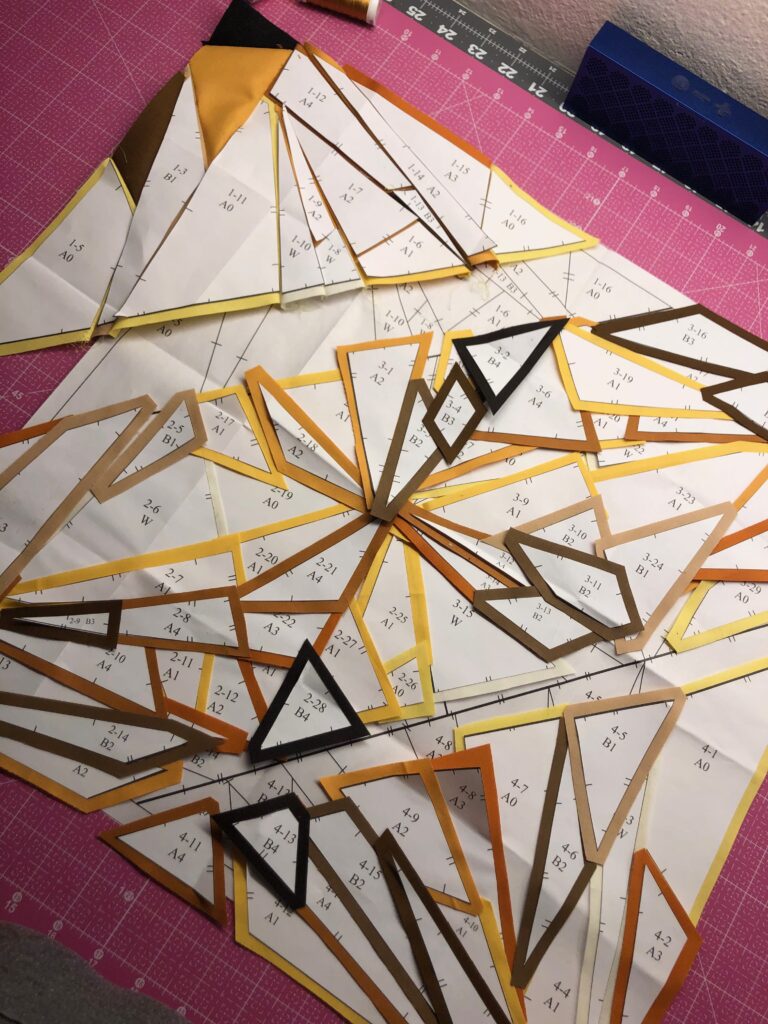 Some of my sprayed pattern pieces started falling off while I was sewing, and I had to finger-press rather than iron with steam to avoid dissolving the adhesive. My snafu did cause more work, but I did learn more about the process and more about Sulky products in the process. So I’ll call that a win! 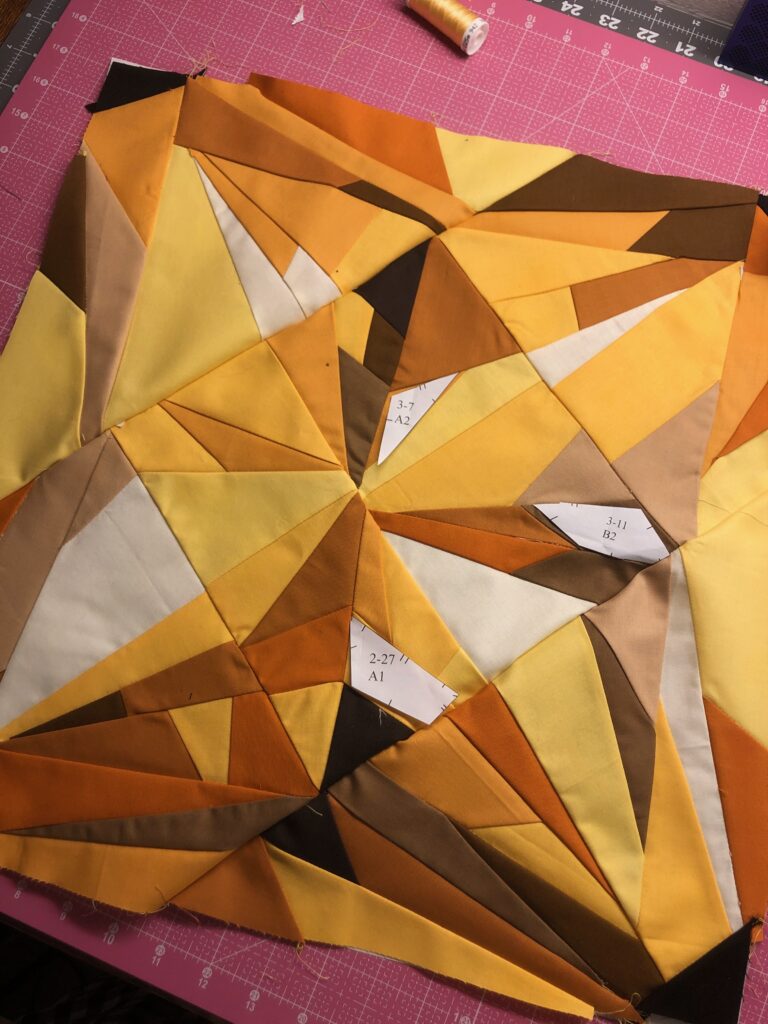 After peeling away the paper that was left, I was happy to give it a final press and admire my handiwork. I like using the Sulky Rayon thread for piecing because it’s nice and thin and allows you to get a precise press. 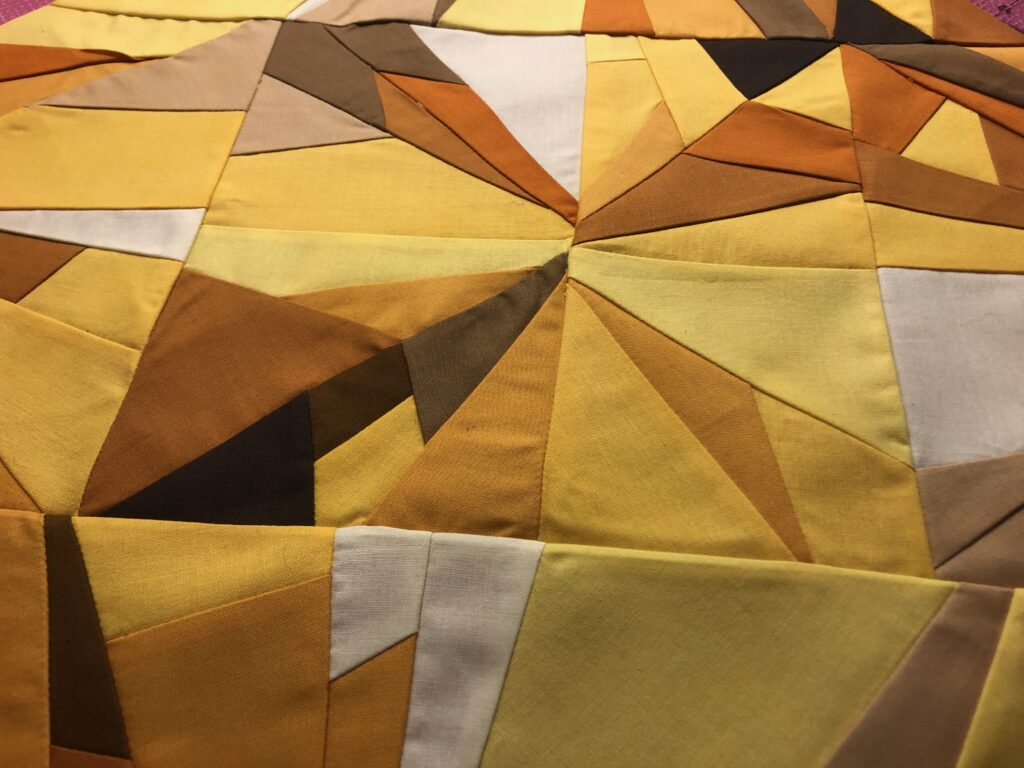 I’ll add this November Birthstone Block to my next mini quilt, which includes the October, November, December and January blocks. Join me next month for December’s installment: Tanzanite. And let me know how you like your Citrine block in the comments below! 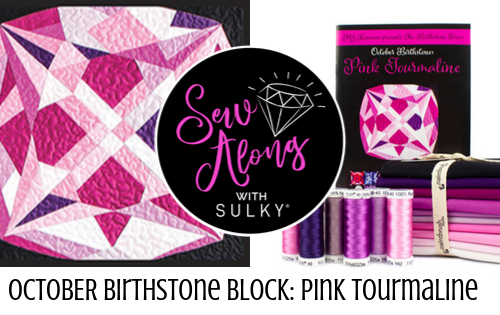 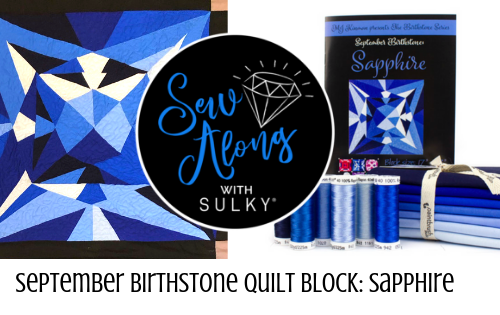 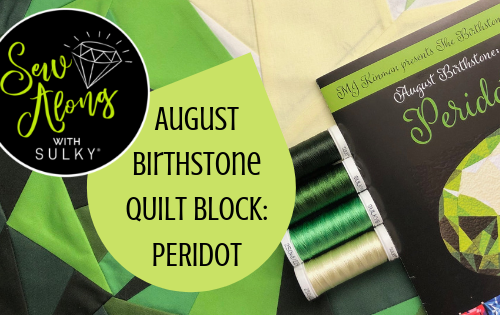