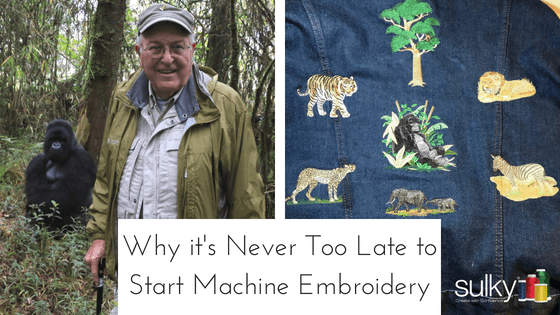 I met Clyde by phone about a year ago when he called with some questions about threads and stabilizers.  I was so charmed by him, and we ended up talking about all kinds of things.  The fact that he was 80+ years old and had just recently embarked on a computerized embroidery hobby blew me away!  He kept in touch, and I asked to read his book. (Yes!  He wrote a book – for his family and friends).  After his wonderful book, I felt like we were friends, too.  It is so unusual to meet men who embroider; and men who begin embroidery in the their 80’s are rare indeed.  I hope you enjoy sharing this very abbreviated journey with Clyde.  I know I have. 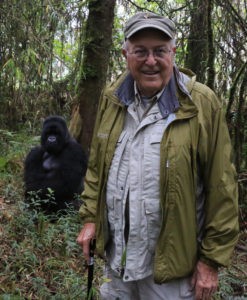 Do you have any background in sewing?

I will say, “Yes”. When I was 10 years old in 1943, at the end of the Great Depression, we lived on a farm and we did not have much money. My bib overalls needed a patch on a hole that I had worn through at the knee. My mother had a Singer treadle machine. She set me down at the machine, found a piece of denim, taught me to cut a piece to cover the hole and with that I had my first lesson in sewing.  My grandmother made quilts for the family and I often helped her. From those early lessons I advanced to working with my wife of 54 years, but never to the extent that I have in the last years. My wife died 10 years ago and 8 years ago a very great lady named Charlene moved in with me. We have a great life together and she was also a seamstress. My sister also added to my sewing interest, since she had an embroidery machine and she showed me how it worked, and that was my start.

What made you want to get started in computerized embroidery?

My sister stitched a cat on my shirt, which sparked my interest. I began looking into this embroidery as a hobby. For most of my life I was a civil engineer. Having been involved in land development pushed my interest in art and creativity. Drawing maps, improvement plans for major housing areas, and large commercial developments, required creating colored renderings for presentation to the city council for approval. I developed these plans and painted or colored them for that use.

Early in my life I received a good camera and with that, I learned how to frame a photo and develop my eye for artistic appeal, which has been very useful while I traveled the world taking photos. 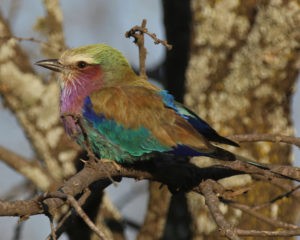 In the summer of 2017, I spent some time with my sister and this visit really sparked my desire to buy an embroidery machine. At that time I was 84 years old and had stopped traveling the world, but was not ready to stop learning and creating beauty. So, I bought my machine. NOW WHAT DO I DO WITH IT?!! At first it was just play. I put a dog on a shirt and it looked cute. Even other people liked it. Where do we go from here? I researched the patterns on the internet. My interest grew, and I needed to create something, which is what I’ve done all my life. Christmas was coming… I bought dozens of towel sets and monogrammed over 150 as gifts for my family, Charlene’s family, and friends! 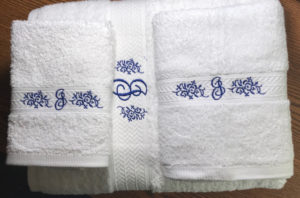 They came out so beautiful, that no one uses them!  They just became art in the bathroom. From that point on the challenge became more difficult.

Having been to Africa 4 times on photo safaris, I decided to fill the back of my denim jacket with wild animals, which took over 200,000 stitches. As many of you know, this requires a knowledge of math and more, to equally space the different-sized animals on the appropriate areas of the jacket. 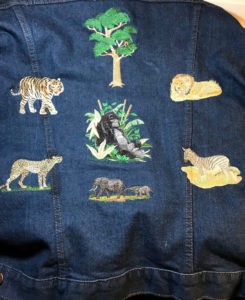 (Note from Patti:  Can you believe he bravely just went ahead and stitched over the seams?!  Clearly the man is fearless!  Most of his animal designs are from www.emblibrary.com)

What are your other hobbies?

This is a list of some of my hobbies and there are many:

What is your favorite Sulky product to use, and why?

With almost 3 million stitches on my machine, I learned many things. One of the most important is – what thread to use. When one talks to sales people, you only get their pitch. I inherited some thread, but it was old and broke at every turn of the wheel. I bought some from the store that I bought the embroidery machine, and it is good with little trouble. Then I looked on the internet for the best embroidery thread and guess what it stated? “SULKY is the BEST”.  I knew I’ve had the best luck with Sulky, since I used over a mile of it on my Christmas towels. I have several racks of Sulky thread on my sewing desk. And that’s WHY! 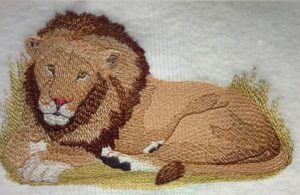 As far as tips for those intending to start a hobby with machine embroidery, the one thing I find interesting is the amount of common math that I use on a daily basis to ensure that my location of the item is exactly where I want it on the garment, and particularly where I have a grouping of patterns to ensure proper and equal spacing. My engineering background is not necessary for success, but I have found it to be an interesting combination. 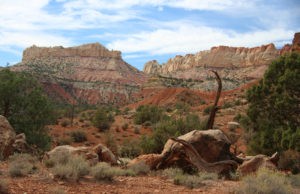 A final note from Patti:  I love that Clyde has so many amazing talents, and yet when he embarked on a new hobby in his 80’s, it was computerized embroidery.  He is such an inspiration to me, and I hope to you, too. 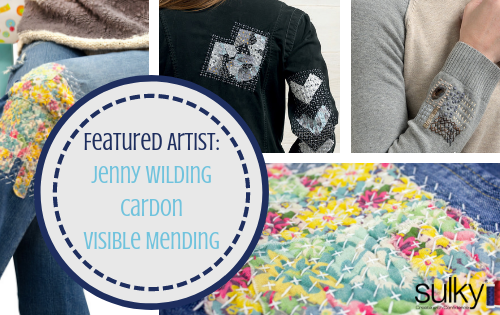 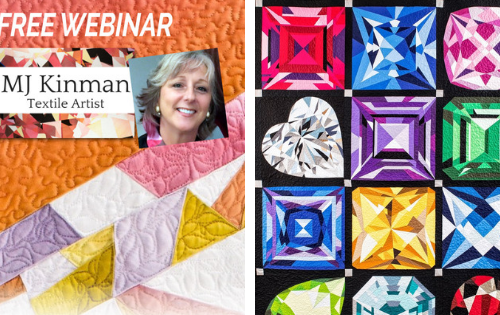 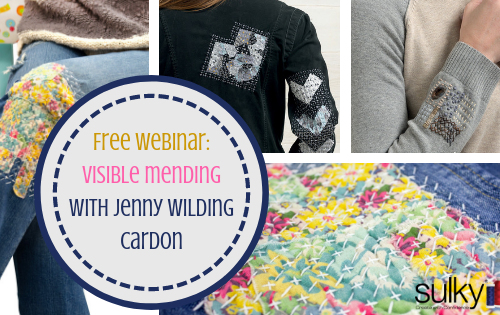